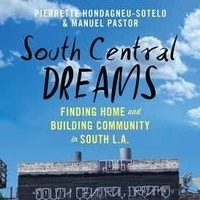 Over the last five decades, South Los Angeles has undergone a remarkable demographic transition. In South Central Dreams, eminent scholars Pierrette Hondagneu-Sotelo and Manuel Pastor follow its transformation from a historically Black neighborhood into a predominantly Latino one, providing a fresh, inside look at the fascinating—and constantly changing—relationships between these two racial and ethnic groups in California.

Drawing on almost two hundred interviews and statistical data, Hondagneu-Sotelo and Pastor explore the experiences of first- and second-generation Latino residents, their long-time Black neighbors, and local civic leaders seeking to build coalitions. Acknowledging early tensions between Black and Brown communities. they show how Latino immigrants settled into a new country and a new neighborhood, finding various ways to co-exist, cooperate, and, most recently, demonstrate Black-Brown solidarity at a time when both racial and ethnic communities have come under threat.

Hondagneu-Sotelo and Pastor show how Latino and Black residents have practiced, and adapted innovative strategies of belonging in a historically Black context, ultimately crafting a new route to place-based identity and political representation. South Central Dreams illuminates how racial and ethnic demographic shifts—as well as the search for identity and belonging—are dramatically shaping American cities and neighborhoods around the country.

Pierrette Hondagneu-Sotelo is the Florence Everline Professor of Sociology at the University of Southern California. She is author of Gendered Transitions (1994), Domestica (2001/2007), God’s Heart Has No Borders (2008), and Paradise Transplanted (2014). She has edited or co-edited five other books.

Manuel Pastor is a Distinguished Professor of Sociology at the University of Southern California where he is also the Turpanjian Chair in Civil Society and Social Change. His most recent book is State of Resistance: What California's Dizzying Descent and Remarkable Resurgence Means for America's Future (2018).