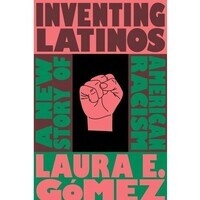 A timely and groundbreaking argument that all Americans must grapple with Latinos’ dynamic racial identity—because it impacts everything we think we know about race in America.

Latinos have long influenced everything from electoral politics to popular culture‚ yet many people instinctively regard them as recent immigrants rather than a longstanding racial group. In Inventing Latinos‚ Laura Gómez‚ a leading expert on race‚ law‚ and society‚ illuminates the fascinating race-making‚ unmaking‚ and re-making of Latino identity that has spanned centuries‚ leaving a permanent imprint on how race operates in the United States today.

Pulling back the lens as the country approaches an unprecedented demographic shift (Latinos will comprise a third of the American population in a matter of decades)‚ Gómez also reveals the nefarious roles the United States has played in Latin America—from military interventions and economic exploitation to political interference—that‚ taken together‚ have destabilized national economies to send migrants northward over the course of more than a century. It’s no coincidence that the vast majority of Latinos migrate from the places most impacted by this nation’s dirty deeds‚ leading Gómez to a bold call for reparations.

In this audacious effort to reframe the often-confused and misrepresented discourse over the Latinx generation‚ Gómez provides essential context for today’s most pressing political and public debates—representation‚ voice‚ interpretation‚ and power—giving all of us a brilliant framework to engage cultural controversies‚ elections‚ current events‚ and more.

Laura Gómez is Professor of Law and Faculty Director of UCLA Law’s Critical Race Studies (CRS) Program, the first specialized program of study on race and law for law students in the nation.  In 2000, Professor Gómez founded CRS and became the second Latina tenured at a top-20 U.S. law school.  She holds joint appointments in UCLA’s Sociology Department and the Department of Chicana & Chicano Studies and Central American Studies.  Her scholarship focuses on the intersection of law, race, politics, and inequality both historically and today. She has published numerous articles, book chapters, op-ed commentaries, and authored several books, including her latest, Inventing Latinos: A New Story of American Racism published in 2020 by The New Press.

NOTE: This event is being recorded for archival, educational, and related promotional purposes. All audience members agree to the possibility of appearing on these recordings by virtue of attending the event or participating in the event. Since this is a webinar, your image will not appear during the session.