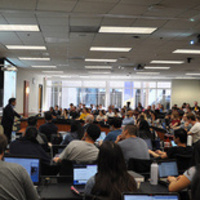 Ramin Pejan, Adjunct Clinical Professor, International Justice Clinic at UCI School of Law, and Staff Attorney at Earthjustice International Program will be speaking at the next installment of the Guest Speaker Series.

Ramin Pejan is an Adjunct Clinical Professor in UCI Law’s International Justice Clinic and a staff attorney with Earthjustice’s International Program. Previously, Pejan worked for the United Nations office of the High Commissioner for Human Rights and the United Nations Environmental Programme on links between human rights and environmental issues such as climate change. Earlier in his career, Pejan was part of a trial team that won a $104.9 million compensatory damage award from a jury against Exxon for a variety of state-law torts—negligence, public nuisance, trespass, and failure to warn—all related to the contamination of New York city groundwater by the gasoline additive MTBE. Last September, Pejan was part of a legal team that, on behalf of 16 young people from around the globe, filed a human rights complaint with the U.N. Committee on the Rights of Child, alleging that leaders of several countries, including Argentina, Brazil, Germany and Turkey, have known about the risks of climate change for decades but have continued to promote fossil fuels and failed to curb emissions. A native of Iran, Pejan grew up in Vancouver, Canada. He received a BA from Duke University, a JD from American University’s Washington College of Law, and an LLM from McGill U. in Montreal, where his graduate work focused on international environmental law and human rights law.