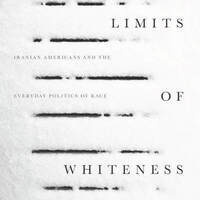 CLEAR Perspectives | The Limits of Whiteness: Iranian Americans and the Everyday Politics of Race

This session will discuss Neda Maghbouleh's book, The Limits of Whiteness: Iranian Americans and the Everyday Politics of Race (Stanford University Press, 2017).

Publisher's introduction:
When Roya, an Iranian American high school student, is asked to identify her race, she feels anxiety and doubt. According to the federal government, she and others from the Middle East are white. Indeed, a historical myth circulates even in immigrant families like Roya's, proclaiming Iranians to be the "original" white race. But based on the treatment Roya and her family receive in American schools, airports, workplaces, and neighborhoods—interactions characterized by intolerance or hate—Roya is increasingly certain that she is not white. In The Limits of Whiteness, Neda Maghbouleh offers a groundbreaking, timely look at how Iranians and other Middle Eastern Americans move across the color line.

By shadowing Roya and more than 80 other young people, Maghbouleh documents Iranian Americans' shifting racial status. Drawing on never-before-analyzed historical and legal evidence, she captures the unique experience of an immigrant group trapped between legal racial invisibility and everyday racial hyper-visibility. Her findings are essential for understanding the unprecedented challenge Middle Easterners now face under "extreme vetting" and potential reclassification out of the "white" box. Maghbouleh tells for the first time the compelling, often heartbreaking story of how a white American immigrant group can become brown and what such a transformation says about race in America.

The CLEAR Perspectives series serves as an informal setting where students and faculty can examine issues of concern to marginalized individuals and communities. At each meeting, discussion will be informed and guided by specific readings or films focusing on a particular issue or demographic. A limited number of copies of the books are available to law students free of charge. Details will be sent to those who RSVP. Copies of the books are also on reserve in the law library.