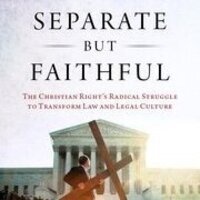 The UCI Law Center for Empirical Research on the Legal Profession welcomes Amanda Hollis-Brusky, Associate Professor of Politics at Pomona College, and Joshua C. Wilson, Professor of Political Science at the University of Denver,  to discuss their recent book, Separate but Faithful: The Christian Right's Radical Struggle to Transform Law & Legal Culture (Oxford 2020).

Fueled by grassroots activism and a growing collection of formal political organizations, the Christian Right became an enormously influential force in American law and politics in the 1980s and 90s. While this vocal and visible political movement has long voiced grave concerns about the Supreme Court and cases such as Roe v. Wade, they weren't able to effectively enter the courtroom in a serious and sustained way until recently. During the pivot from the 20th to the 21st century, a small constellation of high-profile Christian Right leaders began to address this imbalance by investing in an array of institutions aimed at radically transforming American law and legal culture.

In Separate But Faithful, Amanda Hollis-Brusky and Joshua C. Wilson provide an in-depth examination of these efforts, including their causes, contours and consequences. Drawing on an impressive amount of original data from a variety of sources, they look at the conditions that gave rise to a set of distinctly "Christian Worldview" law schools and legal institutions. Further, Hollis-Brusky and Wilson analyze their institutional missions and cultural makeup and evaluate their transformative impacts on law and legal culture to date. In doing so, they find that this movement, while struggling to influence the legal and political mainstream, has succeeded in establishing a Christian conservative beacon of resistance; a separate but faithful space from which to incrementally challenge the dominant legal culture.

Both a compelling narrative of the rise of Christian Right lawyers and a trenchant analysis of how institutional networks fuel the growth of social movements, Separate But Faithful challenges the dominant perspectives of the politics of law in contemporary America.

Amanda Hollis-Brusky is Associate Professor of Politics at Pomona College, where she teaches courses on American politics, constitutional law, and legal institutions. Her first book Ideas With Consequences: The Federalist Society and the Conservative Counterrevolution (OUP 2015, 2019) was the winner of the 2016 C. Herman Pritchett Award for Best Book on Law and Courts from the American Political Science Association.

Joshua C. Wilson is Professor of Political Science at the University of Denver where his research and teaching addresses law, conservatism, and politics in the United States. He has two books on abortion politics: The Street Politics of Abortion: Speech, Violence, and America's Culture Wars (2013) and The New States of Abortion Politics (2016).


This is a virtual event. Zoom login details will be sent to all those who RSVP.

NOTE: This event is being recorded for archival, educational, and related promotional purposes. All audience members agree to the possibility of appearing on these recordings by virtue of attending the event or participating in the event.

To request reasonable accommodations for a disability, please email centers@law.uci.edu.